It appears that I have insufficient time, or at least insufficient discipline, to contribute to this blog, except when I am on sabbatical. Which I now am… so let’s see if I can do better.

I don’t think I’ve written about them yet in this series—another story, for another day—but hylomorphisms consist of a fold after an unfold. One very simple example is the factorial function:

is the product of the predecessors

. The predecessors can be computed with an unfold:

and the product as a fold:

and then factorial is their composition:

Another example is a tree-based sorting algorithm that resembles Hoare’s quicksort: from the input list, grow a binary search tree, as an unfold, and then flatten that tree back to a sorted list, as a fold. This is a divide-and-conquer algorithm; in general, these can be modelled as unfolding a tree of subproblems by repeatedly dividing the problem, then collecting the solution to the original problem by folding together the solutions to subproblems.

An unfold after a fold

This post is about the opposite composition, an unfold after a fold. Some examples:

Hylomorphisms always fuse, and one can deforest the intermediate virtual data structure. For example, one need not construct the intermediate list in the factorial function; since each cell gets constructed in the unfold only to be immediately deconstructed in the fold, one can cut to the chase and go straight to the familiar recursive definition. For the base case, we have:

and for non-zero argument 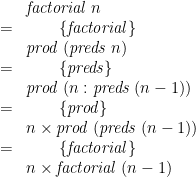 In contrast, metamorphisms only fuse under certain conditions. However, when they do fuse, they also allow infinite representations to be processed, as we shall see.

Fusion seems to depend on the fold being tail-recursive; that is, a

For the unfold phase, we will use the usual list unfold:

We define a metamorphism as their composition:

This transforms input of type

to output of type

: in the first phase,

, it consumes all the input into an intermediate value of type

; in the second phase,

, it produces all the output.

Under certain conditions, it is possible to fuse these two phases—this time, not in order to eliminate an intermediate data structure (after all, the intermediate type

need not be structured), but rather in order to allow some production steps to happen before all the consumption steps are complete.

To that end, we define the

This takes the same arguments as

. It maintains a current state

, and produces an output element

when it can; and when it can’t produce, it consumes an input element instead. In more detail, it examines the current state

, which is like the body of an unfold; this may produce a first element

of the result and a new state

; when it yields no element, the next element

of the input is consumed using function

; and when no input remains either, we are done.

The streaming condition for

from which the body

of the unfold is productive, yielding some

. From here we have two choices: we can either produce the output

, then consume the next input

to yield a final state

; or we can consume first to get the intermediate state

, and again try to produce. The streaming condition says that this intermediate state

will again be productive, and will yield the same output

and the same final state

. That is, instead of consuming all the inputs first, and then producing all the outputs, it is possible to produce some of the outputs early, without jeopardizing the overall result. Provided that the streaming condition holds for

for all finite lists

As a simple example, consider the `buffering’ process

is just a complicated way of writing

. But the streaming condition holds for

may be streamed. Operationally, the streaming version of

consumes one list from the input list of lists, then peels off and produces its elements one by one; when they have all been delivered, it consumes the next input list, and so on.

The streaming version of

is actually rather special, because the production steps can always completely exhaust the intermediate state. In contrast, consider the `regrouping’ example

from the introduction (here,

—if the content doesn’t divide up evenly, then the last chunk is short. One might hope to be able to stream

, but it doesn’t quite work with the formulation so far. The problem is that

is too aggressive, and will produce short chunks when there is still some input to consume. (Indeed, the streaming condition does not hold for

—why not?) One might try the more cautious producer

But this never produces a short chunk, and so if the content doesn’t divide up evenly then the last few elements will not be extracted from the intermediate state and will be lost.

We need to combine these two producers somehow: the streaming process should behave cautiously while there is still remaining input, which might influence the next output; but it should then switch to a more aggressive strategy once the input is finished, in order to flush out the contents of the intermediate state. To achieve this, we define a more general flushing stream operator:

This takes an additional argument

; when the cautious producer

is unproductive, and there is no remaining input to consume, it uses

to flush out the remaining output elements from the state. Clearly, specializing to

The corresponding metamorphism uses an apomorphism in place of the unfold. Define

, except that if and when

stops being productive it finishes up by applying

for all finite lists

if the streaming condition holds for

: the streaming condition does hold for

and the more cautious

, and once the input has been exhausted, the process can switch to the more aggressive

The main advantage of streaming is that it can allow the change-of-representation process also to work on infinite inputs. With the plain metamorphism, this is not possible: the

will yield no result on an infinite input, and so the

will never get started, but the

may be able to produce some outputs before having consumed all the inputs. For example, the streaming version of

also works for infinite lists, providing that the input does not end with an infinite tail of empty lists. And of course, if the input never runs out, then there is no need ever to switch to the more aggressive flushing phase.

As a more interesting example, consider converting a fraction from base 3 to base 7:

We assume that the input digits are all either 0, 1 or 2, so that the number being represented is in the unit interval.

is of the wrong kind; but we have also

can be seen as a defunctionalized representation of the function

applies this function to

Now there is an extra function

; but that’s no obstacle, because it fuses with the

However, the streaming condition does not hold for

is too aggressive; it should be more cautious while input remains that might invalidate a produced digit.

Fortunately, on the assumption that the input digits are all 0, 1, or 2, the unconsumed input—a tail of the original input—again represents a number in the unit interval; so from the state

the range of possible unproduced outputs represents a number between

. If these both start with the same digit in base 7, then (and only then) is it safe to produce that digit. So we define

Now, the streaming condition holds for

(as you may check), and therefore

in base 3. Moreover, the streaming program works also on infinite digit sequences, where the original does not.

(Actually, the only way this could possibly produce a finite output in base 7 would be for the input to be all zeroes. Why? If we are happy to rule out this case, we could consider only the case of taking infinite input to infinite output, and not have to worry about reaching the end of the input or flushing the state.)