Universal properties are a generalization of the notion of a Galois connection between two orderings. Or perhaps I should say: universal properties arise from adjunctions, and it is adjunctions that are a generalization of Galois connections. Adjunctions capture in an abstract categorical setting the idea of “optimal solutions to a problem”; and this idea is itself very general, capturing many of the structures underlying common patterns in programming (not to mention the rest of mathematics). Solutions to equations, products, limits of sequences of approximations, and minimality and maximality are just some of the instances of this powerful abstraction that we will make use of. In the preface to Categories for the Working Mathematician, Mac Lane wrote that “adjoint functors arise everywhere”.

, if there is an isomorphism between the sets of arrows

is the left adjoint and

the right adjoint. The essence of the isomorphism is captured by two natural transformations

, called the unit and counit of the adjunction;

is the image in

is the image in

. The unit and counit satisfy the laws

From them one can construct the witnesses to the isomorphism for arbitrary arrows: for each arrow

, there is a unique arrow

; and conversely, for each arrow

, there is a unique arrow

; and moreover, these two constructions are each other’s inverses.

forms a category: the objects of the category are the elements of the set~

, and between any two elements

, there is a unique arrow if

, and no arrow otherwise. That adjunctions are a generalization of Galois connections follows straightforwardly from the fact that there is at most one arrow between any two objects in a preorder category. Then monotonic functions

form a Galois connection precisely if the sets of arrows

are isomorphic—that is, if both

hold, or neither do, or in other words,

Adjoints of the diagonal functor

of sets and total functions, for given types

, there is an isomorphism between the set of pair-generating functions, of type

, and their two projections, pairs of functions of types

, one can construct the pair-generating function

; and conversely, given a pair-generating function

, one can construct its two projections

; and moreover, these two constructions are inverses.)

The “isomorphism between sets of arrows” can be elegantly expressed as an adjunction; since it concerns pairs of arrows, one side of the adjunction involves the product category

. The right adjoint is the product functor

, mapping an object in

—that is, a pair of sets—to their cartesian product as an object in

, and an arrow in

—that is, a parallel pair of functions—to a function in

acting pointwise on pairs. In the other direction, the left adjoint is the diagonal functor

to the pair of functions

as an arrow in

amounts to the isomorphism

The unit and counit of the adjunction are

. In more familiar terms, the unit is a natural transformation in

, so a polymorphic function; in fact, it’s the function of type

. However, the counit is a natural transformation

, so not simply a (polymorphic) function; but arrows in

are pairs of functions, so we might write this

Then the “fork” operation is in fact one of the two witnesses to the isomorphism between the sets of arrows: given an arrow

of functions of types

, that is, a function of type

, given by the construction above:

or, with more points,

The laws that the unit and counit satisfy are

The universal property of

follows from the isomorphism between sets of arrows: 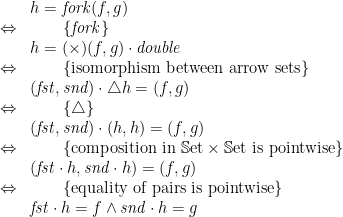 The universal property of

underlies all the useful laws of that operator.

Of course, the situation nicely dualizes too. Coproducts in

arise from the isomorphism between the set of arrows

and the pairs of arrows in

. Again, “pairs of arrows” suggest the product category; but this time, the diagonal functor is the right adjoint, with the coproduct functor

(which takes a pair of sets

to their disjoint union) as the left adjoint. That is, the adjunction is

, and the isomorphism is

, that is, a pair of functions

. The “join” of two functions with a common range is a witness to one half of the isomorphism—given an arrow

The two laws that the unit and counit satisfy are:

Another familiar example from functional programming is the notion of currying, which arises when one can construct the function space

(the type of functions from

), such that there is an isomorphism between the sets of arrows

. Here, the adjunction is

—in this case, both functors are endofunctors on

. The unit and counit are natural transformations

, since the first is a curried pair-forming operator, and the second applies a function to an argument:

The laws they satisfy are as follows:

The isomorphism itself is witnessed by the two inverse functions