One recurring theme throughout this series will be that of a universal property—an identity that captures an indirect means of solving a problem, by transforming that problem into a different (and hopefully simpler) domain, while still preserving all its essential properties. In particular, the original problem has a solution if and only if the transformed problem does, and moreover, the solution to the transformed problem can easily be translated back into a solution to the original problem. One can see universal properties as a generalization of the notion of a Galois connection between two orderings, which are a similarly powerful technique of relating problems in two different settings. (In fact, the proper generalization of Galois connections is to adjunctions, but that’s a story for next time.)

The universal property of the

operation for products is a representative example. Recall that

is completely defined by its universal property:

Such a rich harvest from so small a seed! (In fact, we will see later that an even smaller seed suffices.)

above also in relationships between orderings. As a very simple example, consider the problem of dividing a natural number

by two, exactly; the universal property of a solution

to this problem is the equivalence

is a solution to the problem “compute

; both the existence and the identification of a solution to a problem expressed in terms of division has been translated to one in terms of multiplication—which is arguably a simpler setting. Note that the universal property amounts to an equivalence

, which are in some sense inverses. This pattern will crop up over and over again.

The division example involved an equivalence between the two identities

. More generally, another relation than “

” might be involved. Extending the previous example to integer division, rounding down, we have for

Again, this relates the two (in some sense inverse) functions

; but this time equality is inadequate for stating the problem, and it perhaps more convincing to claim that a more complicated problem

has been translated into a simpler one

. What is more, translating the problem via this universal property pays dividends when it comes to reasoning about the problem, because the simpler problem space is much more amenable to calculation. For example, properties of repeated division

) do not trip off the tongue; but we can reason straightforwardly as follows: 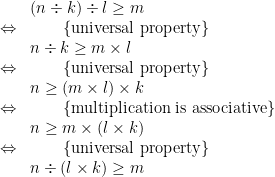 , or in other words,

In this case, the two problem spaces have both involved the same relation

on the same domain, namely the natural numbers; that is not essential. For example, the universal property of the floor function

from reals to integers is given by:

where, to be completely explicit, we have written

for the usual ordering on reals and

for the corresponding ordering on integers, and

for the injection from the integers into the reals. This time the two problem spaces involve two different orderings on different domains; we say that the pair of functions

form a Galois connection between the orderings

. (We also see that the relationship between the two functions

is becoming less like a pure inverse relationship, and more of an embedding–projection pair.)

As a simple non-arithmetical example of a Galois connection on a single domain, consider some set

and a fixed subset

form a Galois connection between

A non-arithmetical example between two different domains is afforded by the field of formal concept analysis, which relates “objects” and their “properties”. Given are sets

of properties, and a relation

to denote that object

is the set of properties enjoyed by all objects in

is the set of objects enjoying all the properties in

; a concept is a pair

. The concept-forming operators form a Galois connection between

This construction can be used to translate a problem about the extension of a concept (that is, an enumeration of its instances) into one about the intension (that is, the characteristic properties of its instances). It is related to the observation that “syntax and semantics are adjoint“—under the analogy that “objects” are sets of mathematical structures, “properties” are axioms, and the relation is “satisfaction”, the models of an axiomatic theory

are included in a set of structures

if and only if the theory

logically entails the minimal axiomatization of